Most Celebrity TV Endorsements: A Waste of Money

Ace Metrix, a national company that tracks effectiveness of TV advertising, paints a much different picture. “We studied every nationally televised ad for the first 11 months in 2010 and found that celebrity ads performed either below average or merely equaled it,” said Ace Metrix CEO, Peter Daboll. “We found with rare exception, celebrity endorsements were largely ineffective and failed to yield the benefits popular wisdom promises. 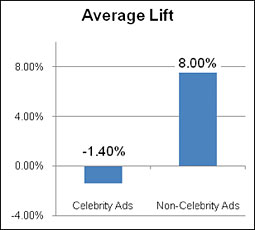 So why are today’s consumers not as easily impressed by celebrity hucksters as they once were? The study conducted by Ace Metrix reports that today’s consumer is informed, time-compressed, difficult to impress, and is only influenced by ads that provide relevant information. They are more likely to be influenced by someone in their social network than a contrived celebrity connection. Simply put, they don’t want products pushed at them, even from a celebrity.

The study also points out that most celebrity ads lack the two key ingredients that consumers want most: relevance and information.

It’s also important to note that consumers polled in this study overwhelmingly cited being “confused” about what product the celebrity was endorsing as a reason for celebrity TV commercial ineffectiveness.

It appears consumers prefer commercials that clearly extol product benefits which could have a relevant connection to their lives; opposed to commercials from insincere celebrities that do little more than insult their intelligence with convoluted messages.

Imagine that, going back to where we were so many years ago, when TV advertising actually did more than amuse and entertain.

Celebrities or not, the new era of TV advertising, may not be that new after all.